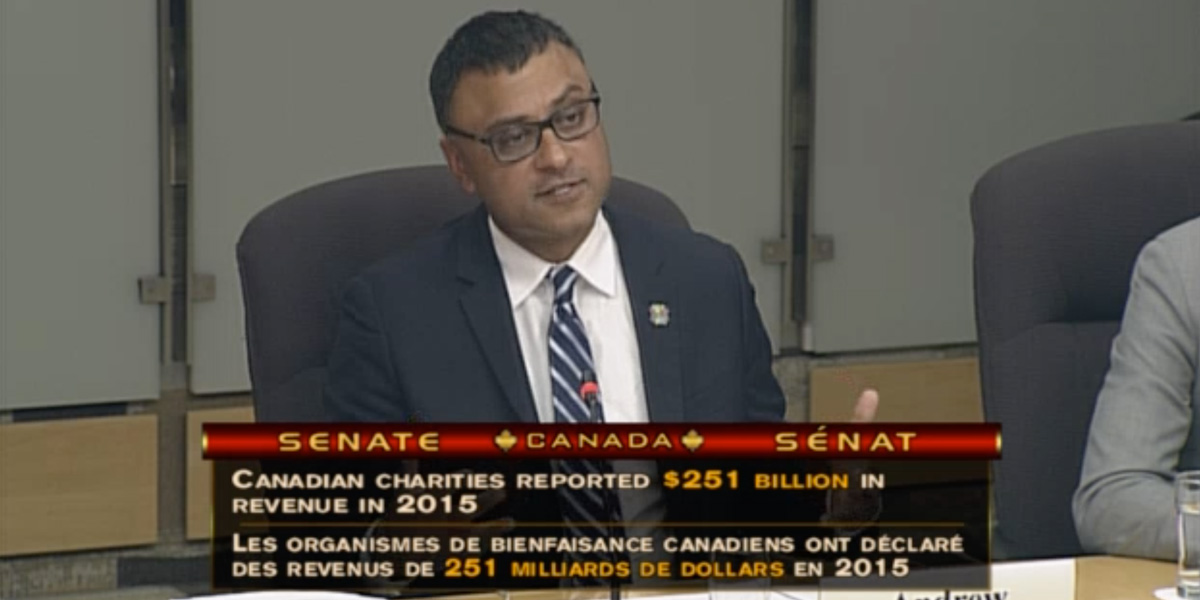 Interview with Andrew Chunilall: Reflections on the Special Senate Committee on the Charitable Sector

The Special Senate Committee on the Charitable Sector was established in January 2018 to examine the impact of federal, provincial and territorial laws and policies governing charities and non-profit organizations. By considering perspectives from a wide range of experts, the Committee is studying ways to improve laws, policies, and regulations that govern the charitable sector, with a view to ensuring that charities and non-profits are able to serve the best interests of Canadians.

Since the committee was formed, it has heard perspectives from a wide range of experts on the charitable sector. Many organizations have presented briefs, including Imagine Canada, Philanthropic Foundations Canada and The McConnell Foundation.

In the following interview, Andrew reflects on his experience, the modern realities facing charities and non-profits, and the opportunity for community foundations.

Describe your overall experience with the Special Senate Committee

It was a real honour to share comments with the Special Senate Committee on behalf of Community Foundations of Canada, especially during this time of rapid change for charities, non-profits, government and business. We all share a desire for a Canada where charities and non-profits can effectively work towards positive social outcomes, and a modernization of the legislative framework is long overdue.

Being in the room, I sensed that the conversation was based on a true curiosity to understand the sector and its challenges. It felt like the senators were genuinely keen to learn, further their understanding of the sector and to have dialogue.

You chose to focus your remarks on the current gap between regulations governing business & non-profit sectors. Why was this approach important?

Canadian businesses operate within an environment that allows them to adapt to the realities of modern society and the 21st century economy by being flexible, innovative and by accessing debt financing and other capital. One offshoot of that — and it’s a good thing — is that many businesses are in the business of ‘doing good’. Charities and non-profits need similar flexibility to explore new business models and approaches to achieving their purposes, including through social finance, social enterprise and public policy advocacy.

As a country, we need to look at the laws and policies that govern charities with fresh eyes. Rather than incremental tweaks, we need to consider wide-scale, holistic modernization for the sector. There’s much that we can learn from countries like the United Kingdom, Australia and New Zealand, where important steps have already been taken.

A number of your remarks underscored the report by the Social Innovation and Social Finance Strategy Co-Creation Steering Group. Why is that report important?

The Social Innovation and Social Finance Steering Group is a group of sixteen leaders from across sectors that were brought together to co-create a Social Innovation and Social Finance Strategy with the Government of Canada. Its report (here) makes a series of twelve recommendations, including several that emphasize the need to remove barriers that prevent foundations from engaging in social finance and social enterprise — innovations that open the door for important alternative business models for the sector.

Community foundations are well-positioned to provide financing for important community initiatives, and a number have already demonstrated leadership — despite the existing barriers. The Edmonton Community Foundation and the City of Edmonton offer debt financing through the Social Enterprise Fund, which has made loans to over 40 organizations across Alberta since 2008, supporting initiatives in areas including food security, the environment, affordable housing and job creation for at-risk youth. Since 2014, the Ottawa Community Foundation has provided more than $650,000 in grants to support social enterprises in the Ottawa area, and the foundation’s Impact Investing initiative works with the Community Forward Fund to provide loans to charitable and not-for-profit organizations. At the London Community Foundation, the Social Impact Fund is a social investment program that turns donations into capital loans for affordable housing and social enterprise opportunities in the London and Middlesex area.

It’s important to note that the report by the Social Innovation and Social Finance Steering Group is the most recent of several calls for the modernization. For example, in March 2017, a report by the Consultation Panel on the Political Activities of Charities (here) called for the removal of barriers that impede charities’ involvement in political activities, as well as for the modernization of the legislative framework governing charities.

Taken together, these reports point to the need for a thorough consideration of the charitable sector, rather than piecemeal updates to individual policy questions.

Why is it important for Community Foundations of Canada and others to speak with the Senate and be visible in this way?

The laws and regulations that govern the charitable sector create the core conditions in which community foundations, other charities and non-profits conduct our work. Those that work in the sector are intimately familiar with the policies and laws that govern our work, and with the ways that they can, at times, impede the positive social outcomes that we are all working to achieve.

In appearing before the Special Senate Committee, Community Foundations of Canada wanted to ensure that the senators heard about the future of the sector, the importance of innovation and the leadership of community foundations, who, by their very business models, are invested in long-term community wellbeing. We felt that it was important that the Special Senate Committee understood the potential that modernized laws and policies could unlock for Canadian charities and non-profits, as well as the communities that they serve.

What can community foundations further do to further support these recommendations?

Community foundations can continue to lead by example and show what could be possible with a modernized legislative framework — by innovating, engaging in public policy advocacy, pushing boundaries and telling their success stories. As I’ve mentioned earlier, a number of community foundations are already engaging in social finance and social innovation.

I’d also encourage all community foundations to continue to share the story of their leadership, and to highlight ways that the impact of their work — and that of charities and non-profits more generally — could be improved with a more modern legislative framework.

We’re grateful as a sector to the Senate for creating a Special Committee on this work as we recognize that it has a variety of competing priorities. We value the attention that Senators Black, Duffy, Martin, Mercer, Omidvar and Raine have provided. I’m looking forward to seeing what comes next.

Further information on the Special Senate Committee on the Charitable Sector, including witness testimonies, briefs and transcripts, is available on the Senate website here.