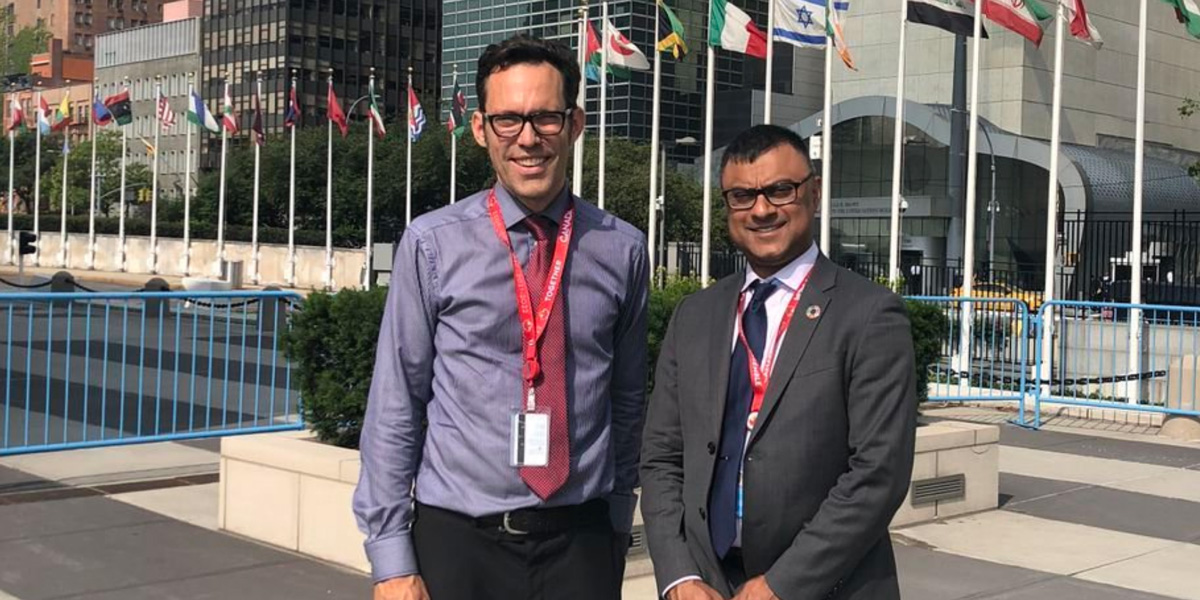 How would you describe your overall experience, as a civil society representative taking part in the official Canadian delegation at the UN’s HLPF this past July?

I was really honoured to be able to represent the community foundation movement at this gathering of global leaders. It was a memorable experience. We (Community Foundations of Canada) were one of the few non-governmental actors in the delegation and had access and time to connect with a range of leaders from Canada and abroad, including Parliamentary Secretary Adam Vaughan as well as Minister Jean-Yves Duclos, who delivered Canada’s voluntary national review. We also had the opportunity to connect with municipals leaders like the Mayor of Montreal, the Mayor of Kitchener Waterloo who were both aware of and interested in the roles community foundations can play in the SDGs.

One of the things that stood out to me was Canada’s unique brand on the world stage. Judging by the conversations people were having with us, it was obvious that many people view Canada as a positive driving force in the world today. It affirmed that Canada is looked upon favourably and that we have some clout that can help us affect real change.

What is the value of civil society engagement with the SDGs? What kind of role can community foundations play?

I think this is where Goal 17 [‘Partnerships for the goals’] is critically important — we see partnerships and collaborations as the centrepiece of effective progress on the SDGs. So many of the goals are interrelated. Advancing on them requires a robust network of partnerships that transcends boundaries — geographic or otherwise.

The community foundation network, whether in Canada or globally, already has those networks in place. We have tremendous capacity to move social and financial capital, knowledge, resources and address governance. Our foundations operate at the ground level in communities, but they are also part of regional, provincial, national and international networks. There is so much potential for us to leverage that for good.

You spoke with a number of youth delegates in your time at the HLPF — can you tell us about that experience?

The delegates I met were mostly from British Columbia, and connected to the BC Council for International Cooperation. They were all there on their own time and their own dollars and were highly engaged and enthusiastic. For them, gender equality (in Canada and abroad) and climate change were perhaps the two most important issues, but they also spoke a lot about building important relationships between Indigenous and non-Indigenous peoples in Canada. I was so impressed with their awareness of global issues and how they understood how such broad metanarratives at the international level can have a big impact on Canadian communities at a local level.

One of the things that I most admired about this young group is how future-focused they were. Certainly, they are frustrated by the way a lot of things are being done right now, and they are keenly interested in exploring alternative structures and entities where they can exercise their passion or purpose. They’re looking for ways to create a better future. It’s inspiring.

What were some common themes that came up throughout the week, specifically in the Canadian context around the SDGs? What should we be thinking about as we continue to work on advancing the goals both at home and abroad?

The three greatest areas of focus for our government were gender equality, reconciliation and climate change. That said, diversity and inclusion was also woven throughout those three themes. For example, parliamentary secretary Adam Vaughan made it clear when we show up to the table to talk about issues relating to the SDGs, civil society also need to reflect the diversity of Canada in our own ranks.

There’s a real awareness of social fragmentation in Canada — a divide that becomes more apparent when we look at Canada through the rural/urban lens. We see that more and more people are moving into cities and so we require greater investment in those spaces, which further perpetuates the social gap. There is so much more to Canada than its urban centres — we can’t dismiss the rest of the country. We have to ensure that both rural and urban environments are compelling places to live, work and play.

Ultimately, being at the HLPF really reinforced the idea for me that we all need to get on board with the SDGs. It’s encouraging that we’ve seen early adoption and leadership within our movement in places like Victoria and Montreal, among others. I think it’s the right time for us to activate the SDGs locally from coast to coast to coast so we can have a collective impact on Canada but also the world.